One of my GO Graduates shared this article with me.  I couldn’t resist passing it on to all of you.

“Drop that Blackberry!  Multitasking may be harmful” – CNN.com

Ever find yourself chatting via instant messaging while checking your e-mail and surfing the Web? Well, don’t pat yourself on the back for your super-productive behavior. 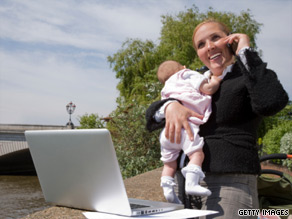 Expert: “The findings suggest there may be a cost associated with becoming an expert multitasker.”

A new study suggests that people who often do multiple tasks in a variety of media — texting, instant messaging, online video watching, word processing, Web surfing, and more — do worse on tests in which they need to switch attention from one task to another than people who rarely multitask in this way.

Specifically, heavy multitaskers are more easily distracted by irrelevant information than those who aren’t constantly in a multimedia frenzy, according to the study in the Proceedings of the National Academy of Sciences.

One reason may be because the multitaskers tend to retain the distracting information in their short-term memory, which affects their ability to focus, compared with people who don’t check their e-mail while talking on the phone and sneaking in some online shopping.

“This study adds to a growing body of literature that says, in general, that multitasking is going to be problematic for people, that it does compromise productivity, and that its consequences can be quite severe in situations like driving,” says David W. Goodman, M.D., the director of the Adult Attention Deficit Disorder Center of Maryland, in Baltimore, who was not involved in the research.

In the study, Clifford Nass, Ph.D., and colleagues at Stanford University gave 262 college students a questionnaire about what types of media they used and how often they used them simultaneously. Examples included video or computer games; online audio, video, or television; telephone and cell phones; instant and text messaging; and other computer-based applications, such as word processing.

The volunteers then took a series of tests in which they had to categorize words, evaluate on-screen red triangles (while ignoring blue ones), switch back and forth between classifying letters and numbers, or press a button when there was a match between two letters presented at different times.

After jumping through the mental hoops, the researchers found that the heavy multimedia users were at a disadvantage. Compared with those who rarely used more than one type of media at a time, heavy multitaskers had slower response times, most often because they were more easily distracted by irrelevant information, and because they retained that useless information in their short-term memory.

While the delay was only about half a second in some tests, this could be enough to cause problems in everyday life, says Goodman, who is also an assistant professor of psychiatry and behavioral sciences at Johns Hopkins University School of Medicine.

“You’re being flooded with too much information and you can’t selectively filter out quickly which is important and which is not important,” says Goodman. “It only takes a fraction of a second for you to take your eyes off the road and miss the guy making a right-hand turn into your lane.”

Gary Aston-Jones, Ph.D., the Murray chair of excellence in neuroscience at the Medical University of South Carolina, says the findings suggest there may be a cost associated with becoming an expert multitasker.

Multitasking may “lower the threshold of distractibility,” possibly harming the ability to do tasks that require intense sustained focus, such as art, science, and writing, he says.

“There are some possibly frightening implications of the study. If it’s not very reversible, then the way the culture has become might be pushing us all to become more and more distractible and less and less able to focus over sustained periods of time,” he says. “But I think it is a little early to jump to that conclusion — we don’t yet know how reversible and flexible these things might be.”

Aston-Jones says that it’s unclear if some people are drawn to multitasking because that’s the way their brain works, or if multitasking itself causes changes in the brain. And it’s not clear if the brain changes caused by switching attention from YouTube to Google to Twitter and then back to your iPhone — if that is what is occurring — are easily reversed.

Dr. Goodman offers the advice he gives to many of his patients with adult attention deficit hyperactivity disorder, or ADHD, who often have difficulty focusing and completing tasks.

He suggests turning off your BlackBerry so that it doesn’t vibrate every time you get a text or an e-mail. “Put the e-mails on your schedule and don’t be a slave to the BlackBerry buzzer,” he says. “I check my e-mails once an hour, once every two hours — I’m not responding to them as they come in.”

However, he says that multitasking won’t give you ADHD, which is a highly genetic condition. “You can’t cause ADHD,” he says. “You don’t wake up at 7 years old or 24 years old and because you played too many video games you have ADHD.”

Aston-Jones says to stay tuned for more research. “There hasn’t been a huge amount of work in this area up to this point,” he says. “It’s an area that’s really starting and will be increasing.”